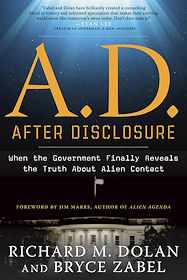 Subtitled "When the Government Finally Reveals the Truth about Alien Contact"

UFO Reality has been covered up for seven decades - a government-led process that is now so ingrained within our culture that it is essentially self-perpetuating.

"...the policy of "deny and ridicule" has worked so well that most of society's established authorities now do the work of the secret-keepers without prodding." (p254)

Indeed, the democratic branches of government are as much kept in the dark as the rest of us, preventing proper scrutiny and oversight of this deep, dark area of (inter-)national security.  That's the belief of Ufologists the world over.  Based upon the mountains of case-files down the years, and carefully investigated evidence of the strongest cases, it's accepted by many of us who read and study the subject that we are not alone.  Further, we are visited regularly and surreptitiously by other intelligences whose agenda remains unclear, and whose technological capabilities shed a light on how backwards we must appear to them.

In this excellent book, authors Dolan and Zabel ask the salient question - how will the world react when it becomes clear to all that our planet receives visits from extra-terrestrials?  They paint various scenarios of how the truth might emerge, and how the governments of the world (focussing mostly on their own, naturally) will react and try to control what is now widely known as 'Disclosure'.  (There are several words used by the authors that have been elevated by the use of a capital letter:  they refer to the alien visitors as Others, evoking the sinister threat of the mysterious 'Others' in Lost; and the shady and knowledgeable cartel of national security players who have maintained the secrecy for decades as the 'Breakaway Group'.)

Interestingly, the authors consider it likely that the secrets have transitioned from government-funded black projects into the private sectors of military technology and aerospace - a process paralleling the rise of global corporate power in general - encapsulated in this excellent paragraph:

"Now in the 21st Century our world continues to move away from a system of independent nations.  Corporations engulf the globe, spanning nations, answerable only to shareholder value.  Today, they are like feudal barons who have divided up the world's resources. National laws are subverted by their power, and international political structures are too weak to stop them.  This is the current structure of the 'New World Order'." (p291)

Such a process has created plausible deniability for the governments of the world, and shifted UFO secrecy into a legal hinterland where no one is truly accountable (pp68-72).  The authors consider the witch-hunts that will emerge from the Disclosure process, as the perpetrators of decades of denial and obfuscation are exposed.  The Media, itself culpable of blinkered perception for decades, will go after those who have successfully deceived us all with the fervour of the converted.  This, alone, could explain the continuing lack of Disclosure, I think, although there's more than that to consider, as I'll set out below.

The authors suspect some kind of general amnesty would be invoked by the Executive, but there are hints in the book from insider sources that not even a pardon by the President of the U.S. himself would be enough to assuage their fears of the personal ramifications of full Disclosure.  I believe them.

The book contains a fascinating discussion about the ways religion and science would be affected by Disclosure, and finds that religion will fare much better.  Science, in particular academic science, is going to be on the rack in a big way:

"The scientist's faith in "mastery of nature" will surely be humbled, if not broken, by the Others.  They will be subject to profound public scorn.  For years, scientists had arrogantly ridiculed legitimate inquiries into UFOs, dismissing virtually all contact evidence as hoaxes.  The ineptitude of the scientific establishment in detecting such an obvious presence will be of profound significance." (p248)

On the plus side, the scientific data on UFO technology, hidden all these years  should emerge into the light, allowing scientists to make leaps forward.  Well, that's the theory anyway.  Personally, I can't imagine the Americans wanting Chinese technologists to be the first to crack zero-point energy, or electrogravitics, especially as the classified science that has gone on behind the scenes in black project work has evidently failed to get results from back-engineering in all the years they've had this stuff locked up.

As one moves through the book, it becomes clear that the many sensible and rational points raised by the authors create a double-edged sword.  Of course, divulging UFO secrets and the Big Picture in general would be good for humanity.  But the many dangers inherent in that process are, frankly, terrifying.  The authors are right to indicate the threat to our global economic system.  Not only would there be an initial panic in the markets, but so many of the institutions that hold our society together would be in the spotlight for their utter incompetence and denigration of duty down the years, that faith in our very system would be severely rocked - much as the 2008 banking crisis and its aftermath has exposed wanton failure in the financial sector.  The true nature of power in the world would be exposed, further undermining our sense of democratic accountability and institutional propriety.  Cynicism would quickly turn to anger.

Then there's security - a subject inadequately tackled by the authors, whose overall coverage of the Dsiclosure topic seems, at first glance, pretty comprehensive.  If the Others are abducting our citizens, then the onus will be on our governments to protect our citizens from this process, and to defend our skies.  That might seem like the equivalent of trying to shoot down fighter jets with mediaeval catapults, but nevertheless that's what the people will expect the governments to do, and do successfully.  Imagine abductees appearing on day-time TV, post-Disclosure, with their horrific accounts of their experiences, and how that will play in the media.  Simply put, the governments will have to admit that they cannot offer adequate security in the face of UFO activity, and in-so-doing will be admitting their failure to meet their primary obligation to their citizenry.

Perhaps the authors left out such arguments because they realise that far from rationally advocating Disclosure they would find themselves undermining its potential.  It's ironic, then, that in some ways the military-industrial complex would actually have the most to gain from Disclosure.  Why? Because a frightened public would demand a massive upgrade of our air-defences, and a huge investment in space-based defence technology.  Far from berating aerospace corporations for their historical collusion with secret government committees, the indebted public purse would throw trillions more at them in the hope of protecting our world from a perceived external threat.

But then, that is only my opinion - one researcher among many. Wisely, authors close with these thoughts:

"Only when Disclosure is a reality will we truly know how it will unfold.  The world will change with this knowledge, of that there can be no doubt.  Merely contemplating this reality changes a person, but actually seeing it may be almost too much to bear. We shall see." (p314)

Perhaps we will, but there's no place for triumphalism yet.  I think Disclosure is a long way off, and (as I've intimated in my own novels) will be dragged out of the governments of the world kicking and screaming.