'A Deed Without a Name' 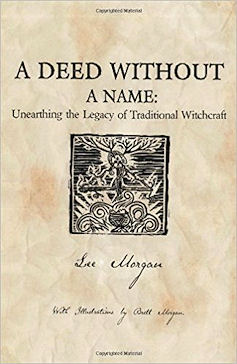 With illustrations by Britt Morgan

Lee Morgan is a practising witch.  In this book he successfully binds together the various strands of theory underpinning traditional witchcraft and its modern use.  He notes that it is important to love a story to be able to recreate it, and Morgan's passion for the Craft also comes through in this book.  There is a devotion to the material it contains, and the sense of wisdom gained from years of arduous practice.

Like the mainstream religions, witchcraft has numerous wings.  Traditional Witchcraft relies heavily upon a patchwork legacy of historical writing which is incomplete.  Much of this previously censored material is passed to us from those who prosecuted and murdered witches, and therefore contains a strong observational bias towards malign intent, or 'maleficium'.  The narratives of the witches themselves were captured through this obscuring and antagonistic filter, and this places an onus upon modern researchers to pick apart the conscious reality of the Craft practised by these poor souls from the propaganda espoused by their persecutors.  Morgan does not shy away from this task, and the book is honest to the point of being quite blunt about many of these alleged practices.  He distinguishes between the dark and the light, contrasting, say, the "benandanti" (perhaps we would call these Italian white witches) from their darker "malandanti" Continental counterparts.

There are others, too - creatures of various natures that fall under the broad umbrella term of witchcraft.  Morgan includes a bestiary derived mostly from historical reports from the British Isles and continental Europe.  Included are were-beasts and vampires.  Superstitions cast a long shadow through these pages.  But although this might sound as though A Deed Without a Name is descending into a folkloric gothic horror show, the sense of witchcraft portrayed within book is more closely aligned with another Pagan practice - that of Shamanism.  As Morgan argues, one has to try to understand the way of thinking in pre-Enlightenment times to unravel the mysteries described by the practitioners of those times.

Witchcraft is a calling that only some will answer.  Even in these relatively liberal times, the practice of witchcraft is proscribed socially, if not legally (the Witchcraft Act of 1735 was only repealed in Britain in 1954).  Witches must still tread carefully.  This particularly applies to Traditional Witchcraft which keeps various sexual practices to hand for those wishing to explore the mysteries more deeply than others.  Disneyfied versions are also available.  The Calling brings would-be witches into a precarious life.  The author argues that the variety of witchcraft practices reflects the diversity of spirits and beings on the other side of the 'hedge' which make themselves known to the witch through dreams and visions.  Not all witches are called to work for the same forces.

"The way that the future witch is called is determined by what they are called on to do.  I believe that this element of function and service, both to this world and the Otherworld, is something that we have all but forgotten in modern witchcraft in favour of a path primarily about self-discovery.  Whilst self-discovery and ones [sic] own spiritual evolution is inarguably an important occult aim, it appears that there was more to the bigger picture of witchcraft in the past." (p9)

The author challenges modern romanticised ideals about witchcraft.  His gritty accounts are often graphic - ably illustrated by his partner's artwork.  The witch's flight is explored through an understanding of altered states of consciousness combined with a traditional belief in other 'skins'.  These are rather like astral bodies, but with a more earthy aspect, aligned with shamanic practice.  Through this metamorphosis, whether spiritual, hallucinogenic or otherwise, the witch can assume the form of a familiar and go about their business accordingly.  This is a more fluid concept than one might assume.  There is a merging of forms from without and within.  There is a meeting of spirit for mutual gain, and often mutual pleasure.  Fetch-beasts and familiars take on a reality in this writing.  'Riding the hedge' draws together aspects from both sides.  One could draw parallels with Tulpas, alien abductions, faerie folklore, and the rest, and the author explores many of these crossovers.  Perhaps they are all simply ways of describing a similar other-worldly experience, interpreted through different cultural lenses.

The author is keen to draw modern practice into this work, too.  There are numerous testimonies from anonymous sources, some of which are quite profound.  In many ways, the intellectual enquiry pursued by revivalist movements represents a far cry from the uneducated, backwater practitioners of old, whose adherence to the Craft must have been far more intuitive.  Through these testimonies, one senses this felt relationship with witchcraft in modern times.  This not only personalises the journey, but also provides insight into this more shamanic practice.  The sense of place becomes vitally important:  The symbiosis of person and environment so often described in books about witchcraft.  The spirits beyond the hedge are not just attuned with these places and elements, but are actually of them.

"These ideals about the nature of the divine were no part of the vision shared between shamanic cultures and the elder witchery of Europe.  The spirits in their world were like forces of nature, in fact they may well have literally been forces of nature, whereas the spirits as we've come to understand them through the lens of Christianity and other flesh-hating ideologies have become this intellectualised concept of 'purity' and total benevolence." (p93)

This intermeshing of factors makes practice increasingly complex, as well as intuitively driven.  As alluded to in the above quote, this is not helped by the thick layers of Christian interpretation which sit heavily upon modern Pagan thinking.  I got the sense of this distortion in some of the rituals described in the final chapters of the book.  How much were these practices an excuse for letting off steam during a time when there was no such concept as personal liberty?  From a sceptical point of view, one could argue that Traditional Witchcraft was a creature of its time - an extreme counter-cultural reaction to both zealous Puritanism and ardent Catholicism.

This is a thought-provoking book which, for me, fleshed out the traditional practice of witchcraft.  It is darker than many modern books I have read on the subject, but sensibly steps back from a total immersion in the black arts.

A Deed Without a Name

A Deed Without a Name