Wild Things They Don’t Tell Us

We at ‘Cosmic Conspiracies’ attended a lecture by Reg Presley a couple of years ago, at a conference organised by our friends Tom and Kerry Blower.  At that point I’d heard of Reg Presley as the rock star who was into UFOs.  His lecture was certainly not what I expected.  It was, in short, brilliant.  It was witty, thought-provoking, eccentric and, above all, full of the kind of home truths that others lesser mortals fear to mutter.  I was mightily impressed, not least by the way the audience responded to Reg.  I think it helps that he is political and anti-establishment; his Rock ‘n’ Roll days are clearly in his blood. 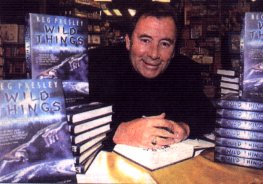 I suspect that the uninitiated member of the public who decides to dip into a little Ufology by reading good old Reg Presley’s book is going to find a lot of this stuff a little hard to take.  They may just feel a little overwhelmed by the bomb-blast effect on their cosy paradigm.  'Wild Things' is like the Niagara Falls of paranormal story-telling: sweeping through UFOs, Crop Circles, alchemy, politics and religion, often in a highly controversial manner.  This allows Reg to maintain a great pace, and I found myself not wanting to put the book down.

The informed reader is going to find plenty of new stories and insights, although they may recognise one or two faux pas along the way.  But here’s the thing: It doesn’t matter!  Because the work is a charismatic and political one, challenging the orthodox mindset to question itself and repent of its sin of mental sloth.

After all, other authors have written technically accurate and scientific works that have sadly moved us no further on.  By contrast, in the War of Hearts and Minds, this book kicks butt.

You can order your copy of 'Wild Things' through Amazon.com here: