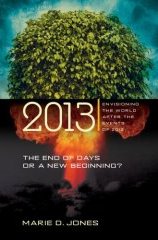 Subtitled: 'The End of Days or a New Beginning?'

The Mayan Calendar finishes its long cycle around the winter solstice of 2012.  The date is associated with the End of an Age, although the Mayans offered no concrete predictions as to what the date might bring.  As such, it's open season, frankly, to fill this knowledge gap with all kinds of imaginary events, both cataclysmic and renewing.

This book reflects the broad panorama of ideas put forward to solve the Mayan riddle.  In a journalistic fashion, Marie Jones explores the future, drawing upon a wealth of articles, books and ideas available in the literature of futurology.  She even includes a large section at the back of the book full of independent commentary by other alternative knowledge authors.  In a way, '2013' is a 'meta-article'.  It collects references and analyses trends.  What it does not do is offer any concrete prediction for the end of 2012.  Instead, there are possible scenarios laid out, none of which is discarded by the author.  She seems hopeful rather than fearful of the future, and is humanist in her approach:

"As for the frightening earth changes we might face, preparing as best we can for any natural disaster only makes sense, but if we are looking at supervolcanism, comets striking the Earth, or even gamma-ray bursts, having three days' worth of food and water just won't cut it. So, we do the best we can, and instead of focusing  on how we might survive such a catastrophic event...perhaps instead we should focus on the things we CAN do - the things we have power and control over: Environmental degradation. Economic inequity. Gender imbalance.  Decimation of species.  Global climate change.

I'm not sure I agree with this sentiment, but it sums the book up rather well.  After chapters and chapters of summarised accounts of the work of various academics and authorities, we are left in the same state we started the book in.  The future will bring what the future will bring; prepare if you think that will help, but don't give up on the idea that the world will carry on, with all its real problems unresolved, and, perhaps, worsening.

Marie Jones is evidently very well read, and has a talent for bringing complex subjects and ideas into a more understandable realm.  There is so much packed into '2013' that can be rather dry reading at times, but it will appeal to students of futurology, and associated arcana.  I learned a lot!  However, personally, I found the extrapolations from current trends a little too linear.  I would have liked to have read more off-beat ideas, perhaps from the world of science fiction, rather than academia.  After all, the best futurologists write fiction (Arthur C. Clarke being a magnificent example).  It would have loosened things up a bit, and engaged my interest more.  More than, say, the problems of decoherence (is this really even a word?) in quantum computing.

One 'linear' prediction cited in the book has already failed to materialise:

"The next solar cycle, according to (National Center for Atmospheric Research) scientists, is going to be a big one, approximately 30 to 50 percent stronger than the last cycle.  Known as Cycle 24, this highly-anticipated time of unprecedented sunspot and solar storm activity is set to begin in 2007, or early 2008, and will reach its peak in - you guessed it - 2012." (p102)

Surprisingly, there have been no sunspots in 2008.  So either the Sun is saving itself for a grand finale, or Cycle 24 is a damp squib.  Which is the whole point about futurology. We can extrapolate linear trends all we like, but in highly complex systems chaos plays a major part.  It's what makes the future interesting. And it's also what makes the Mayan mystery interesting. Was their calendar a predictive tool, or simply an arbitrary device? There's no real way of knowing, because the Maya disappeared long ago.  An event which they themselves seemed to have failed to predict...