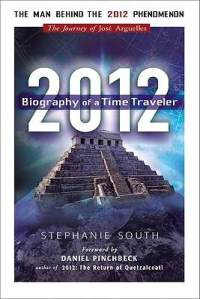 Subtitled: "The Journey of José Arguelles"

I don't normally read biographies, and I before I picked up my review copy of this book I admit to knowing nothing at all about José Arguelles.  What interested me was whether there would be any new theories about the meaning of 2012 in the book.

José Arguelles is an art historian with a PhD whose immersion into New Age philosophy put him into the forefront of the beatnik/hippie movement.  He has lived what is undeniably a very colourful life.  His career's bi-polar highs and lows match the volatility of his private life.  His theoretical musings are certainly out there, and are founded upon a lifelong study of Buddhism and meditation practice.  His occasional association with communes, and his desire to break free from the rat race of Western life, put him at odds, refreshingly, with the more usual New Age evangelical trend towards embracing money-generation and right-wing politics.

So, he's a curious fellow, and that makes for a fascinating biography.  It helps considerably that the author, Stephanie South, is a very capable writer, and the book has been well-researched and written.  On a presentational level, the only criticism I would have is the quality of the photographs supplied by the 'José Arguelles Archive' -  which sounds a bit like one of the libraries set up by ex-Presidents of the United States.  This kind of pretension is something that, unfortunately, runs through the book, like the frequent listing of presumably notable people whom I had never heard of.  I waited a long time to find out what it was about this chap that I should be sitting up and taking notice about.

José Arguelles became famous for his book "The Mayan Factor", his off-beat theories of time, and particularly for the "Harmonic Convergence". The latter is a term denoting a date in the Mayan calendar back in 1987 which essentially provided a marker for the final approach to 2012.  Arguelles promoted this date widely and his efforts created a worldwide flurry of media interest in New Age ideas, and related ceremonies to mark the date.  The description of the Harmonic Convergence as a worldwide phenomenon helps to provide us with a taster of the global impact of the 2012 event to come.  It's going to be phenomenal - not just in the alternative community, but in the mainstream media too.  I wonder whether José Arguelles will be at the forefront of that coming media jamboree?  I think it's likely that he will, and that more people of my generation will hear about his work and teachings in the intervening years.  Here's what he thinks about 2012:

"For Jose, the meaning of December 21, 2012, has everything to do with shifting time frequencies. This transition is anticipated as the transformation of the present material-industrial order of the planet into a full renewal of the human mind, where telepathy is universal." (p304)

"Then, as if a switch were being thrown, a great voltage will race through this finally synchronised and integrated circuit called humanity.  The Earth itself will be illumined.  A current charging both poles will race across the skies, connecting the polar auroras in a single brilliant flash.  Like an iridescent rainbow, this circumpolar energy uniting the planetary antipodes will be instantaneously understood as the external projection of the unification of the collective mind of humanity. In that moment of understanding, we shall be collectively projected into an evolutionary domain that is presently unconceivable.  And yet, we shall know. Like infants in a vast new playground, we shall retain the highest and most exalted vision."  (p217; an extract from 'The Mayan Factor')

The scientific part of me cringes to read this, but the artistic side of me is impressed.  José Arguelles is a visionary, and a capable avant garde artist.  He founded the Whole Earth Festival in California, and was an early environmentalist long before Global Warming became an issue.  He also lives the life he advocates, which is a rare quality.  The biography covers his life up until the early nineties, during which he married several times, and brought up a family.  During those early years he battled with alcoholism, and occasionally experimented with psychedelic drugs.  He worked within establishment academia for about twenty years, and was formally part of the Buddhist community. As his children grew up and left home (and suffered tragedy), he also fled the nest of (relative) normality, eventually ending up in makeshift digs in Hawaii.  Using Hawaii as a base, he travelled extensively promoting his philosophies and his Dreamspell concept.

Personally, I can relate to him as a person a fair bit.  He has moments of great inspiration and motivation, mixed with long periods languishing in a myre of lost opportunities and frustration. He often indulged in escapism, but at times also bravely pushed the boundaries of acceptable action.  He has involved himself as a founder member of countless fledgling organisations which idealistically strove to change an indifferent world.  He understands and supports the struggles of many indigenous peoples.  Centrally, his lifelong passion is a belief that art can change the world - the true artist facilitating change almost akin to Plato's Philosopher King.  Establishment art, by contrast, is often guilty of intellectual fraud.

"From ancient to modern times, the creation of art was analogous to initiation into a mystery or a process that, through specific stages, revealed the divine process of creation.  José felt this view was not present in most modern-day artists."  (p83)

Maybe 2012 offers an opportunity for his artistic vision to take a beleaguered humanity in a positive direction.  Promoting such an ideal is a battle that is on-going for José and his companions, although, frustratingly, one will need to get hold of the second half of this two book biography to read in detail about their progress over the last 15 years.

Taken as a whole, the biography is likely to act as a 2-volume resumé promoting José Arguelles as the 2012 Guru of Choice.  He has certainly attracted the attention of many notable New Age proponents in our broader culture, like Shirley MacLaine, and Jon Anderson of 'Yes'.  I will be watching with interest what role José Arguelles will play in the run-up to 2012.

2012: Biography of a Time Traveler