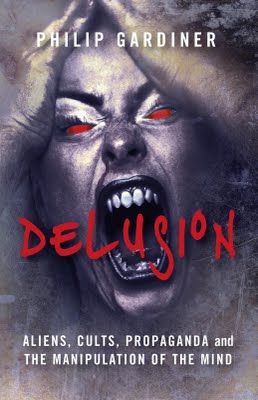 Subtitled "Aliens, Cults, Propaganda and the Manipulation of the Mind"

Philip Gardiner mostly writes about Gnosis, secret societies and other similar aspects within the alternative knowledge sphere.  This book is something of a departure from that genre in that it tackles more general issues about existence in the modern, Western world.  Gardiner not only critiques materialism and the insanity of the rat race, but delves deeply into human nature and how much of our behaviour is driven by instinct hardwired into our DNA.  His thesis is that the fabric of our modern lives is largely deluded.  Our complex existence is driven by the need to acquire stuff, at the expense of what is real.  This is not a particularly original thought, but some of his insights are certainly entertaining.

You might read the last paragraph and wonder to yourself what that has in common with the front cover of the book?  Good question.  The cover look more like a pulp fiction horror novel, but the contents of the book are more thoughtful; even wise.  Books about Buddhism might wish to lead us away from the banal nature of material existence, but I bet none of them has a screaming banshee on the cover!

There is a self-help aspect to 'Delusion', too.  It's like it was written by an anthropologist who's aiming the book at members of the tribe he's just spent one too many years with.  Although it is a little jaded and cynical at times, in the 'grumpy-old-man' tradition, I actually think there are some excellent observations within its pages, and found myself nodding away in agreement many times.

"We are all pawns in a game that has gone out of control, because it is a life spent in an illusionary world with nobody specifically controlling it anymore." (p30)

The nature of humanity is to be nomadic, argues Gardiner.  Civilisation, through forcing us to become sedentary in our habitat, has imparted upon us a disconnection from nature.  Although our work/life balance is bizarre, many of our behavioural patterns are driven by deeply embedded instincts.  As a retired marketing man, Gardiner provides fascinating insights into how advertisements and marketing strategies take advantage of our subconscious needs to get a sale, and thus make a quick buck out of us. He raises our awareness of how we are constantly being outwitted, and how our capacity to question is being dumbed down.

Funny if it wasn't so scary, he discusses how he immersed himself into the world of daytime TV as an experiment, and found his intellect floundering after just a few days. He describes how shopping centres and malls are like caves of wonder, full of traps waiting to snare the unwary consumer.

Interestingly, he also warns about the difficulties of dropping out of the rat-race, and the social consequences of questioning things openly.  It's like you've joined a cult, he quips.  Which leads us neatly to the true core of the book.  In chapter 12 we find the real meat of Gardiner's discourse.  As an established author he is often invited to speak at UFO conferences, and is interviewed on many quirky radio stations orientated towards paranormal phenomena.  In this chapter, he takes the entire genre apart. Bravely biting the hand that feeds, he vents his spleen against the rise of the new pseudo-religions of Ufology and related conspiracy theory.  Alien Abductions are all in the mind, he argues - a psychological phenomenon as old as humanity, but with a new alien twist.  The proponents of ancient astronauts fare little better:

"Whilst we stand in awe of the fabulous tales of reptilian shape-shifters and ancient astronauts we are gullible to the ramblings of those that would be our new messiahs." (p129)

Certainly, there are many authors to whom this applies (I know - I've reviewed some of their books!), but I think the thrust of his argument is an over-generalisation.  Many researchers in Ufology have a more academic or journalistic attitude than he is giving credit for, and some are even scientists.  It may be true that sensationalism has taken centre-stage in recent years, and many authors feed the incessant appetite for the next big story at the expense of their personal integrity.  But I don't think that that means that we should abandon our interest in the probability of extra-terrestrial life, and the possibility that we have been visited by intelligent alien life.

I was struck by his prior observation about how men subconsciously note the exits to a room just entered, and scour the landscape for possible intruders; following age-old instincts.  Is our preoccupation with intruders from space just another reflection of that aspect of male behaviour?  Are we not simply applying that instinct to the new exit in the sky?  In which case, an interest in this subject is entirely natural.

This is quite a short book - and there are obvious fillers within its pages to bulk it out.  The section on junk mail is certainly superfluous, and regrettably not as entertaining as "Delete this at your Peril" by Neil Forsyth.  Gardiner's love of balance found a natural home in his grammar, where the frequent loss of apostrophes was made up for by an unexpected gain in hyphens throughout the text.  But overall I thought this was an enjoyable read, and I learned a lot about marketing and the unexpected influence of human instinct in our decision-making.